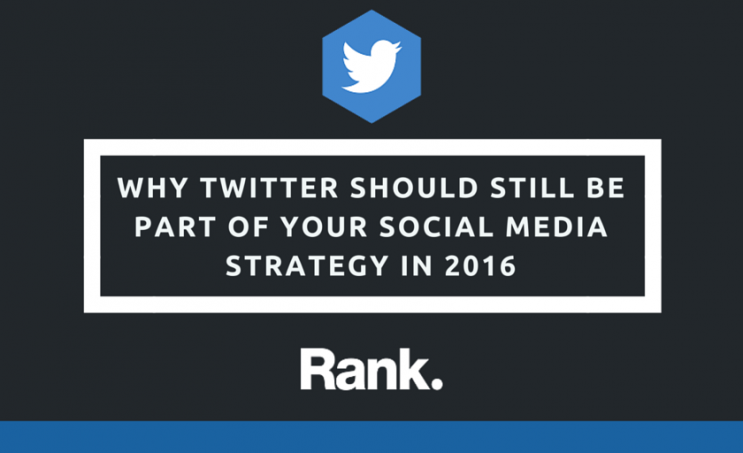 As an avid user of Twitter, I often find myself conflicted with regards to the current state of the popular social media platform. While it has entrenched itself in modern society as a vital source of groundbreaking news, discussions, and Kanye West rants, it has also dominated the headlines recently with analysts and users alike claiming that Twitter is dying. Unfortunately, fun as Twitter can be for users such as myself, there are a number of unappealing factors that turn people off (including brands):

Not in my opinion.

If it weren’t for the social media micro-blogging site known as Twitter, none of those words would have held any pertinence these days, at least within the digital world. While many are quick to criticize Twitter these days due to its user growth slowing down, the social media website has cemented its position among the elite and has become a must-have channel for digital marketing many brands.

Some stats backing up Twitter’s prominence within the social media environment include:

While there does seem to be some issues with Twitter overall, that doesn’t mean your brand should forsake it when developing a social media marketing strategy. Rather, this is the time to take advantage of Twitter during a down period. Test new concepts and capture traffic away from your competitors, especially when the site has 320 million monthly active users. Read that again…320 million monthly active users. Now that’s quite a smorgasbord of users to target, no?

Here is why your brand should be incorporating Twitter into your marketing strategy.

Unlike any other social media site, Twitter still remains the best platform for users to connect with brands and engage in real discussions. I myself have utilized Twitter to accomplish the following: encourage a local restaurant to put a delicious coconut beer back on the menu, coordinate with OptinMonster to help expedite popup integrations, return & reorder a product within 30 minutes with a clothing retailer, assist companies such as Amazon & Canva identify responsive issues within emails, help brands fix issues with their PPC advertising campaigns by pointing out glaring mistakes within ad delivery, and more.

Of course, some of those accomplishments may be viewed as annoyances on behalf of brands, but the fact of the matter is that Twitter still provides the best opportunity for regular users to interact with companies in a meaningful and timely manner. The beauty in all of this is that by engaging in discussions with companies in real-time, users end up developing an affinity for brands that can ultimately translate in increasing the overall customer lifetime value. For companies, this can prove to be the ultimate customer service and complement traditional phone support, especially when Twitter continues to roll out updates from time to time to enhance brand engagement. This is also where brands can shine through and engage with users in fun and unique methods.

When it comes to developing the ideal marketing strategy with Twitter, a heavy amount of time and resources will go into curating community content, engaging in discussions with customers & influencers alike, and driving traffic to your website via creative tweets. However, Twitter represents a relatively untapped channel of digital advertising for many brands. While Facebook is the leading platform for social media advertising, Twitter advertising provides another channel to target specific users to promote content, build awareness, increase web traffic, and generate engagement with mobile apps.

Below is an overview of the type of campaigns that can be managed via Twitter advertising:

While there may be an issue with too many bots within the platform, the advertising options available provide legitimate opportunities to convert users outside of the regular channels (Facebook & Google). Additionally, brands can choose to remarket to users on Twitter and develop customized audiences based on email databases, which can allow you to broadcast marketing messages that may fall by the wayside in the trash/spam folders. While the standard CPM costs may be a bit more rich than advertisers come to expect for certain segments compared to Facebook, the investment necessary to make an impact on Twitter can still provide a better ROI than traditional marketing initiatives, both offline and online.

There’s a reason why “trending” became something on Twitter. Depending on the type of content your you push out, Twitter can be a powerful channel to help propel a site to the next level, make a meme go viral, or make an impact online. Below are some examples of how Twitter proved to be powerful for brands.

Power out? No problem. pic.twitter.com/dnQ7pOgC

The beauty of this tweet was that Oreo quickly thought on its feet and used an event in real-time to push out content that resonated with users. For most regular users, this was sort of a “breakout” for the cookie brand, as their social media marketing efforts have been lauded and celebrated since Super Bowl XLVII.

Of course, not every brand or company on Twitter is Oreo. They have an entire creative marketing team, both content and design, behind each and every tweet. For the regular user on Twitter, you need to make better use of the limited resources available to try and make an impact that is 1/100th of Oreo’s Super Bowl tweet. So, how can you apply content marketing strategies to Twitter? Ensure that you follow the following:

Additionally, Twitter can be an extremely valuable resource within your inbound marketing arsenal. If you’re producing a healthy amount of new content each month, considering implementing a strategic content promotion schedule to tweet out links back to your website. Should you hit the right cord, you can open the floodgates and significantly increase the amount of referral traffic you capture from the micro-blogging website.

Where does Social Media Marketing with Twitter go from here?

2016 should be an interesting year with regards to Twitter’s ability to stay relevant in the social media world. Recent reports suggest the company is looking at expanding upon the 140 character limit for Tweets and changing timelines to feature content users may engage with rather  than just showing the latest tweets. While many analysts have derided the company for considering these changes, they do indicate that CEO Jack Dorsey is not content sitting on the sidelines and is looking at options to innovate the product. Remaining stagnant is not an option for a social media site that has seen its user growth stall over the past year. Rather, embracing change and innovation is a refreshing change for Twitter, which may open the door for new projects in the coming year. Periscope, it’s livestreaming application, seems to be doing very well, especially after the breaking news over the weekend that former competitor & SXSW darling Meerkat is planning on leaving the livestreaming game.

Whether or not Twitter remains relevant years from now is inconsequential because at the moment, the social media platform is an ideal channel to utilize for marketing campaigns. The advertising capabilities, customer support features, and content marketing tools give companies of all types opportunities to develop brand loyalty with followers, increase web traffic, and generate revenue. And isn’t that the whole point of social media marketing?