Social Media Shopping on the Rise During Holiday Seasons

Ever wonder about the true power of social media when it comes to finding the perfect gift for a friend or a loved one? Crowdtap, a marketing agency, investigated the growing trend of peer influence and social media networking and the effect recommendations have on motivating users to purchase.

Social Media Proves its Worth as a Form of Earned Media 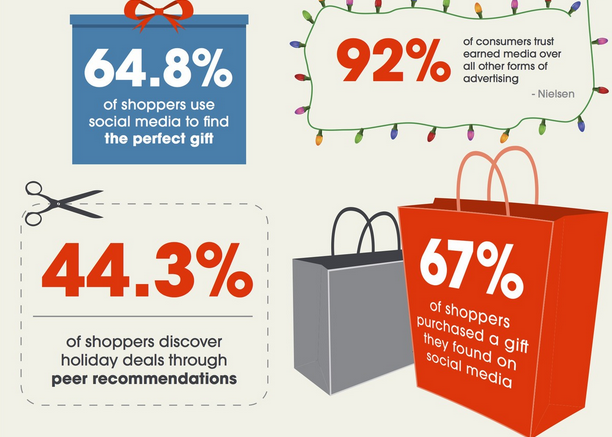 According to research from Nielsen, 92% of consumers will place their trust in earned media over paid advertising. Unlike traditional advertising, which some may deem as invasive and obtrusive, earned media is welcomed as a form of marketing due to it’s organic nature and non-sales driven approach.  As a result, users are more receptive to social media marketing, and can even be positively influenced by peer recommendations. Additionaly, Crowdtap’s research reported that an estimated 67% of shoppers purchase a gift discovered through social media channels, which reinforces the powerful effect social marketing can have during holiday seasons.

Which Channels are the Biggest Influencers?

Crowdtap surveyed shoppers to find out which social network led the pack when it came to purchasing a product via peer recommendations, and to no one’s surprise, Facebook came out on top. Facebook is the leading social media network and has become rather ubiquitous in this day and age. Pinterest, the popular multimedia social network where users can “Pin” images to their boards, came in second ahead of the likes of Twitter, blogging platforms, and Instagram. Once again, this should not be a surprise to online marketing professionals as it has been established that Pinterest has become a powerful vehicle for driving users to e-commerce stores.

When you find a good deal, what’s one of the first things you do? According to Crowdtap’s research, you’ll most likely share it via a social network to provide your friends and family with an opportunity to take advantage of the latest deals. When asked which types of content shoppers would be most likely to share on Facebook during holiday seasons, digital coupons and links to contests/giveaways led the way. Below is a full breakdown from Crowdtap’s survey:

Leveraging social media for e-commerce stores and regular online businesses makes sense and is a worthwhile investment…but what about traditional brick and mortar stores? The latest trend points to social media use inside stores increasing at a rapid rate. According to Crowdtap’s research, shoppers indicated that they are likely to do the following via social media:

Mobile marketing technology is advancing at a rapid rate, providing smartphone users with improved camera technology and the ability to upload photos/check-in with a touch of a button. Brands can leverage this and incentivize users to either check-in via Facebook or Foursquare, and then further incentivize users by asking them to share what they are purchasing to their social networks.