Below is a quick recap of the recent social media updates to hit the news wires. 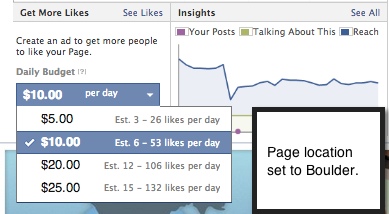 Last week, Facebook rolled out their Promoted Page Likes advertising globally, giving brands an opportunity to increase their presence on the #1 social media site without using third party services. Facebook has been plagued with third party companies offering severely discounted Facebook likes, almost all of which are fake and do not provide any added value for brands. With the latest Facebook Advertising update, page owners can now target very specific segments, set a daily/lifetime budget, and start generating legitimate fans that will interact with the brand’s viral content.  In order to leverage this feature, the Facebook pages must have a physical address as the geo-targeting will by default select a local audience. However, through the ads manager, you can change this location to target a broader geographic area.

Until now, Twitter’s promoted products have only been available to users on an invitation-only basis. Seeking to further monetize its growing traffic, Twitter will now make this feature available to all U.S. users; however, it remains to be seen when this feature will be rolled out globally. Users in the United States now have two options to further promote their brand on Twitter: Promoted Tweets and Promoted Accounts. The former advertising product will allow page owners to promote specific content, whereas the latter promotes accounts, similar to Facebook’s sponsored stories.

Google received some good news this week, as the latest studies coming from the Business Insider report that their social media network, Google+, is now only second to Facebook with 359 million active users. In comparison, Twitter has 269 million active registered members, and the king of social media, Facebook, has 700 million active users. Google+ can attribute it’s growth to the synchronization of all its Google products, such as Gmail, YouTube, and Google Maps.

A recent study prepared by Digitas and Curalate reports that an estimated 70% of all brand engagement on the aforementioned social media site is created by end users. The report pointed to a lack of activity on the part of brands, particularly from the fashion retail and automotive industries. Since its launch in late 2011, Pinterest has proven its weight in gold for a number of companies in generating significant brand exposure, and in some cases, increasing sales for e-commerce websites. According to the study, electronic brands tend to be very active, generating 47% of all electronic-based pins.